November has been a busy month for the Taan's Moons project. Alison and I went back to each of the six schools to continue our work with the Kindergarten (some mixed grades) classes. Thirteen large circular felted pieces, incorporating Alison's story of each moon, have been created with the children of the six elementary schools of Haida Gwaii.

This session had a different flow from the second session. Instead of working together with the whole class on each activity, we worked simultaneously in small groups on different activities. While I worked with three or four students at a time to create the felt pieces from start to finish, Alison, the teachers and volunteers worked with the other groups of students on related activities. Rotation of activities would happen quite naturally, when children were done an exercise or when the activity would not hold their attention any longer.

We brought some activities we had used in session two, like the felt board story and the memory card game, to deepen the children's understanding of the story and embedding new words. But before we started with any of those activities, we began each day with 'warming up our imagination'. As this was the third time the children moved through the story with their bodies, we could really see how much they had learned in those sessions. For example, they remembered and understood the newly introduced words and concepts like 'hibernating' and 'migrating'. 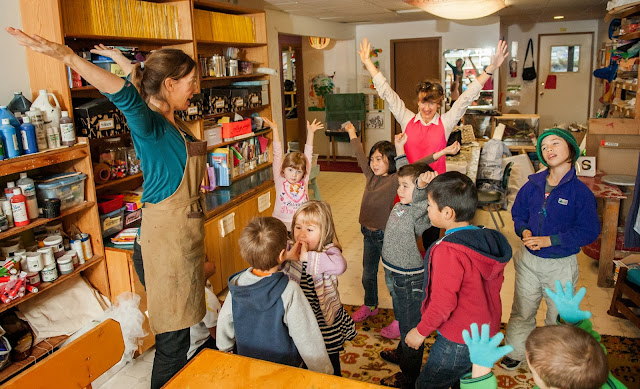 The Haida youth dance group under guidance of Tyler Crosby returned to the schools and this time the whole school participated: 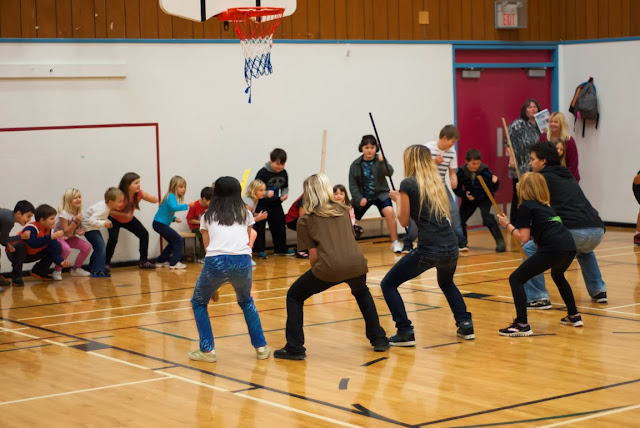 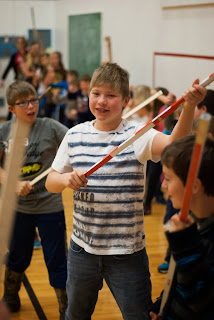 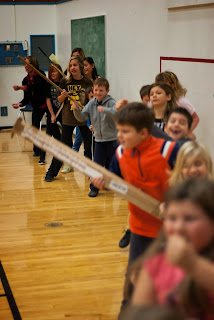 And we brought new activities to the classrooms. One of these was a creative writing exercise where the children were invited to create their own bear story. 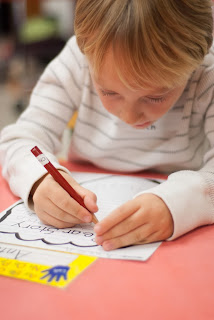 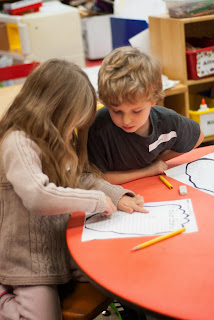 Paper weaving was an activity for the class that created 'Cedar Bark Weaving Moon': 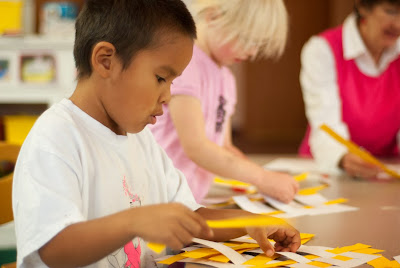 Another activity was based on the felted berries the children had made during session two. We brought the book 'Wild Berries' by Julie Flett, a beautiful story about a little boy who goes berry picking with his grandmother. Story time is such an important part of the Kindergarten daily routine, and this book fitted perfectly into our project. After listening to the story, the children were invited to sort, count and string the felt berries. 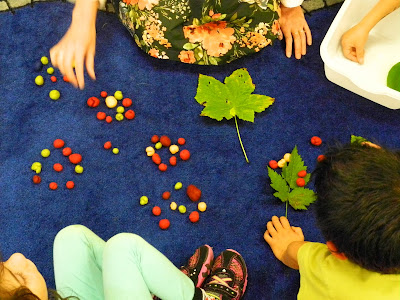 Song and dance were incorporated into the day to release energies or when attention spans scattered: 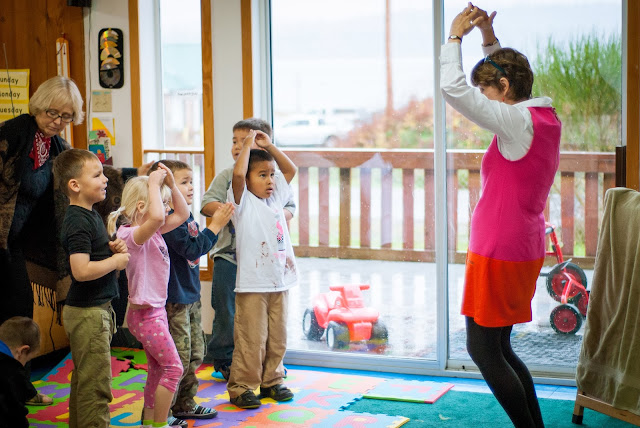 In the afternoons we introduced the Taan's Moons felt playmat, which has each month/moon represented and is created with wet- and needle -felting techniques. This became a popular play station for the children. 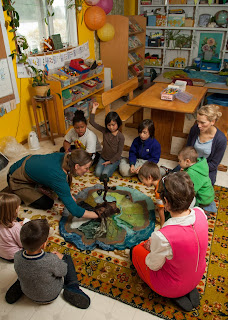 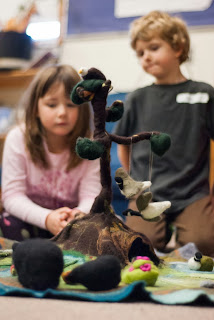 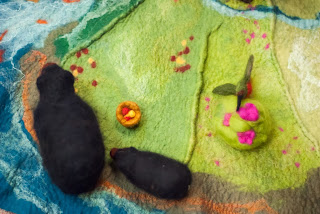 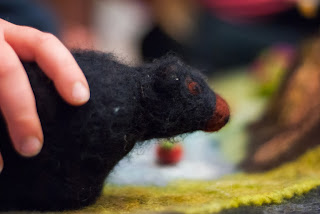 Creation of the Felted Illustrations:

While Alison engaged the children in the above mentioned activities with the help of teachers and volunteers, I continuously worked with small groups of students to create the felt moons from start to finish. 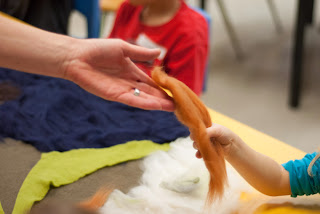 We based the wool designs on the sketches created for each moon, which were inspired by Alison's story and the children's drawings (see 'Taan's Moons drawings' in previous blogpost): 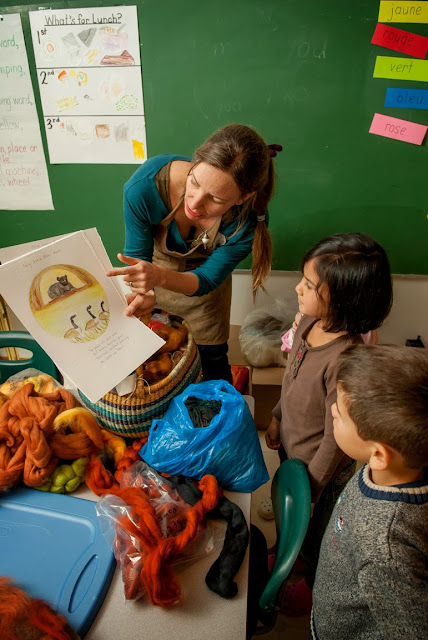 We started out by laying out the wool and creating designs: 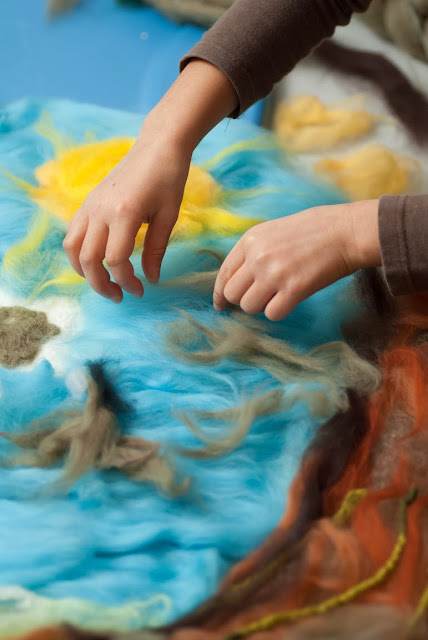 The felt roots and squares that the children created during session two were incorporated in the design: 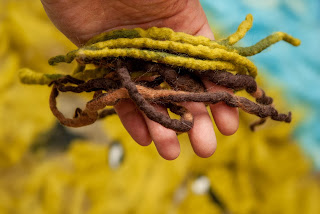 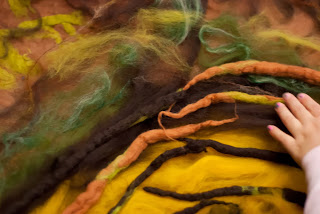 Once the design was complete, we covered the piece with a polyester cloth and poured hot soapy water on top and started to rub with circular motions. A lot of rubbing was required. 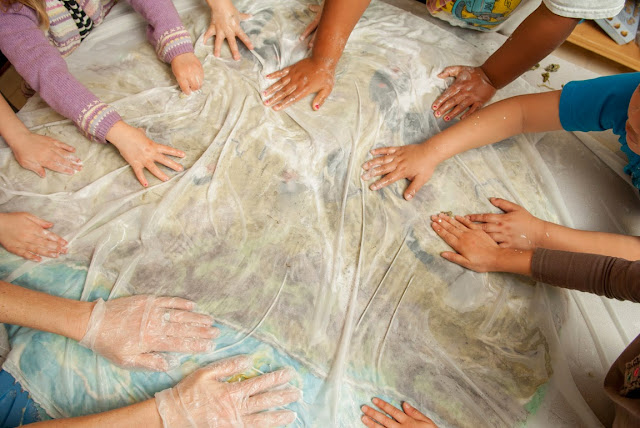 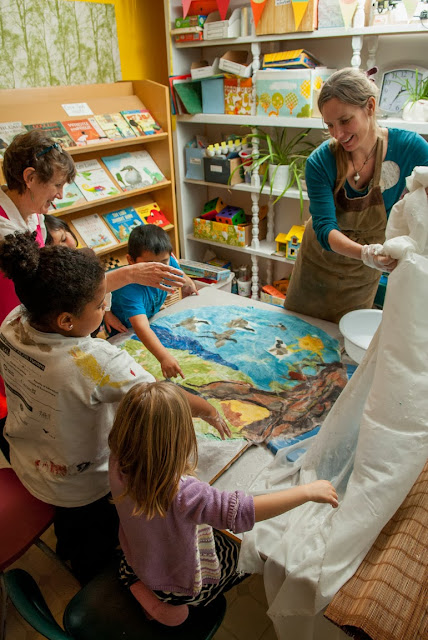 Once the piece was firmly felted, we rolled it in a large bamboo mat (blind) to shrink and make it stronger: 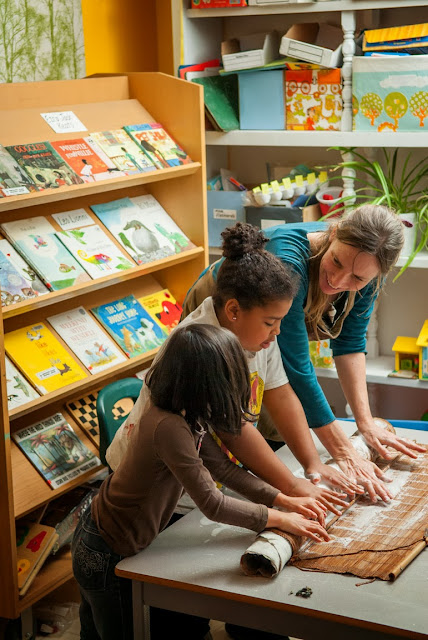 Happy with the end results: 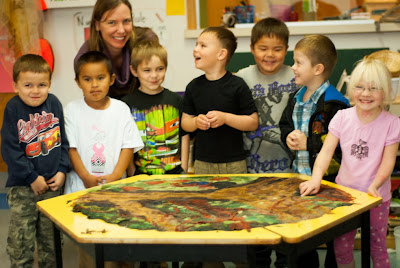 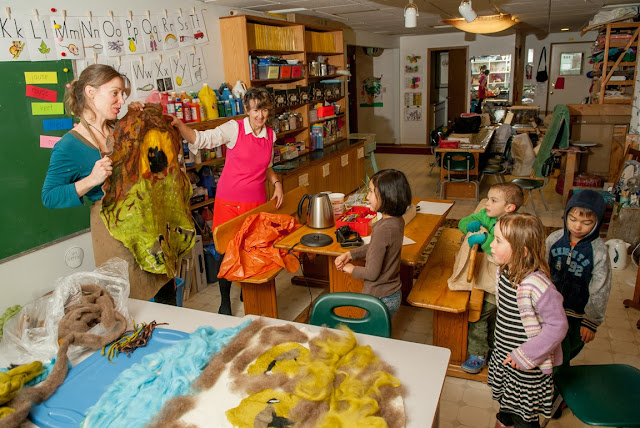 So much fun! I will post finished felt pieces once the photos have been taken by Jason.

We're sad the collaboration with the children has come to an end. But the project is far from finished. Many more stages are to follow; from creating a process book for the teachers to exhibits of the felted moons at ArtStarts Gallery (from March - August 2014) and at Haida Gwaii venues in the Fall of 2014. We are also in the process of working with a publisher to create a story book, to be published in the Fall of 2014!

Lots of exciting Taan's Moons events in 2014 to look forward to.

We are so grateful for the support from ArtStarts in Schools, SD50 and Literacy Haida Gwaii to make this project a reality! Ha'awa!
Posted by Kiki at 11:59 AM

Kiki, i am in awe of this project. This is such rich learning all around. x.